Dick Madness Round One

The full bracket. Many thanks to those who have voted thus far. I appreciate it! 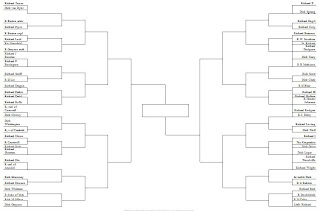 The Match-Ups (follow the links for the full write-ups)
Richard Turere vs. Dick van Dyke: Turere is a Kenyan teenager who developed a way to keep lions from attacking livestock. Dick van Dyke is an entertainer.
Richard Burton (actor) vs. Richard Pryor: Becket and Mark Anthony (and husband of Elizabeth Taylor) faces off against one of comedy’s greats.
Richard Burton (explorer) vs. Richard Loeb: explorer/official/pseudo-sexologist/racist is up against a young murderer
Richard Mansfield vs. Richard Grayson (author): a Victorian Shakespearean actor and possible Jack-the-Ripper suspect vs. modern-day author, writing professor, and humorous politician
Richard J. Riordan vs. Richard Parkes Bonington: former mayor of Los Angeles faces off against a painter
Richard Steiff vs. Richard Henry Lee: inventor of the teddy bear vs. a colonial Virginian who first suggested the US colonies declare independence from Great Britain
Richard Dragon vs. Richard Parker: Dragon is a fictional martial artist (or Kung Fu Master if it’s the 1970s) while Richard Parker could be any of the following: father of Peter Parker (Spiderman), the tiger from Life of Pi, a cannibalized sailor from a dreadful Edgar Allan Poe novel, or a cannibalized teenager sailor from real life
Richard Dadd vs. Richard Rolle: Dadd was a talented but mentally ill painter who murdered his father because he thought his father was the devil in disguise. Rolle was a medieval mystic who felt the fire of God’s love burning inside him (and he wrote some nice devotional literature). Dadd died in a Victorian insane asylum; Rolle died of the plague. I’m not sure which was worse.
Richard, earl of Cornwall vs. Dick Cheney: here we have two political figures, so this match-up kind of makes sense. Cornwall was the younger brother of England’s King Henry III and was also King of the Romans (which is really “Germany”). Cheney used to be the Vice President of the United States and he shot a buddy in the face. Oh, and he looks like Penguin!
Dick Whittington vs. Richard, earl of Cambridge: whoo-hoo two medieval dudes! The real Dick Whittington was the mayor of London; the nursery-rhyme Dick Whittington owed his success to his cat. Cambridge was a member of the royal family who was executed by Henry V.
Richard Nixon vs. Richard Cromwell: more political figures! Nixon was once President of the US and “not a crook” (his words, not mine!). Cromwell was the son and heir of Oliver Cromwell. Richard tried to rule England as protector, but he was terrible and the monarchy was brought back instead.
Richard Rich vs. Richard Sherman: Rich was a douche who got Thomas More murdered. Sherman wrote a bunch of fabulous Disney songs.
Richard Dix vs. Richard, earl ofArundel: a Hollywood actor vs. an abrasive earl that was once bitch-slapped by Richard II. Good times.
Richard Hennessy vs. Richard Dawson: the man behind Hennessy cognac vs. Mr. Family Feud.
Dick Whitman vs. Richard, duke ofYork: the birth name of Don Draper (Mad Men) vs. the father of Richard III.
Richard Monckton Milnes vs. Dick Grayson: Victorian gentleman with an unsurpassed collection of erotic literature vs. the original Robin, the Boy Wonder (later Nightwing, later still Batman, but now Nightwing again).
Right side:
Richard II vs. Dick Sprang: childless, deposed king of England (who features prominently in my dissertation) vs. a comic-book artist from Fremont, Ohio (go Ohio!)
Richard Engel vs. Richard Cory: the baby face of news vs. the main character from a poem and a Simon & Garfunkel song
Richard Branson vs. R.W.Southern: brash, British CEO of everything Virgin vs. a medievalist historian extraordinaire
St. Richard vs. Richard Dudgeon: a canonized medieval bishop vs. the Devil’s Disciple from the George Bernard Shaw play
Dick Tracy vs. Richard Burton Matheson: the yellow-coated, square-jawed detective vs. a legendary sci-fi author
Rick Scott vs. Dick Clark: jerk-face governor of Florida vs. America’s Oldest Teenager
Richard Horatio Blair vs. Richard III: the son of George Orwell vs. Richard III (seriously, do I even need to tell you about him?)
Richard Shelton vs. Richard Mentor Johnson: a young medieval knight from a Robert Louis Stevenson novel vs. a slave-marrying, bar-owning vice president of the United States

Richard Rodgers vs. Richard J.Daley: composer of all your favorite musicals vs. Papa Daley, Mayor of Chicago
Richard Loving vs. Dick Wolf: the man who helped make interracial marriage legal vs. the creator of Law & Order
Richard I vs. Richard Neville,earl of Warwick: the Lionheart of Robin Hood fame vs. the man who made and unmade kings in late medieval England


Dick Diver vs. Dick Lugar: stand-in for F. Scott Fitzgerald in Tender is the Night vs.
Richard Woodville vs. RichardWright: a medieval nobleman who was father of a queen and later murdered vs. a great American author
Dick Brett (Invisible Dick) vs. Richard le Rakiere: a kid with invisibility juice vs. a Dick who drowned to death in shit
Richard Bird vs. Richard Doubledick: an actual bird, an actor, a politician, a computer scientist, or an embezzler - Richard Bird is a flexible type vs. a Dickens' character with a ridiculous name
Richard M. Daley vs. Little Richard: the younger Daley, mayor of Chicago vs. a pioneer of Rock ‘n Roll


Voting: like last year, you don’t have to vote for all the match-ups. I would love it if you did, but you can pick and choose if you so desire. To vote you can:
-e-mail your picks to me at dicksihavestudied@gmail.com
-leave them in the comments (blogspot)
-Ask-box message me (Tumblr)
-reblog and give your votes (Tumblr) if you don’t care about secrecy
Posted by White Hart at 09:00