This Richard is a British landscape painter, who died tragically young of tuberculosis. Richard was born in 1802 in a village near Nottingham; for economic reasons, his family moved to Calais in 1817. Although Richard had some artistic instruction from his father, his earliest watercolors date from once he was in France and studying with an outside instructor. In 1818 the family relocated to Paris, and Richard joined a famous studio. He worked exclusively with watercolors until 1824 when he started to focus on oil paintings; in both mediums he focused on marine landscapes. In the mid-1820s, he journeyed throughout Europe, visiting England, Normandy, Venice, Florence, Pisa, Genoa, and Basel (among other places). During the last two years of his life, Richard expanded beyond marine landscapes and painted views of Venice and illustrations to works of medieval history or historical fiction (such as novels by Sir Walter Scott). According to his entry in the Oxford Dictionary of National Biography, the development of Richard’s “painting technique was breathtaking and experimental. By the summer of 1827 there was little but scale to distinguish visually between his work in oils and his work in watercolours.” (Pretty impressive, eh?)

Richard collapsed in June 1828, weakened by either sunstroke or exhaustion, and later fell ill with tuberculosis. His parents took him to London in August, but treatment failed and he died on 23 September 1828 (about a month before his twenty-sixth birthday). Richard had actually been quite famous in his day, so his passing was widely mourned.

According to the painter Eugene Delacroix, a close friend of Richard’s:

“To my mind, one can find in other modern artists qualities of strength and of precision in rendering that are superior to those in Bonington's pictures, but no one in this modern school, and perhaps even before, has possessed that lightness of touch which, especially in the watercolours, makes his work a type of diamond that flatters and ravishes the eye.”

And now for some images! Here are a few of Richard’s paintings. 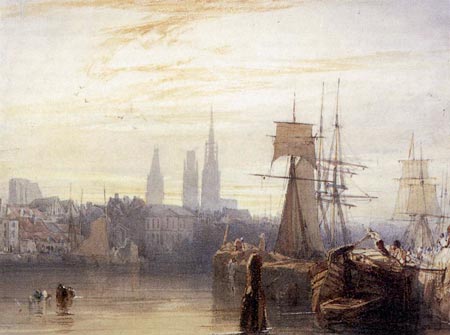