Dick Madness Round One Part Two


As usual, you don’t have to vote for all the match-ups. I would love it if you did, but you can pick and choose if you so desire. To vote you can: 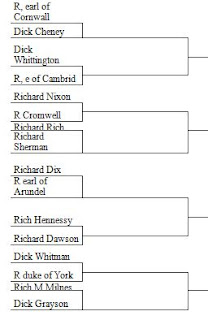 Richard, earl of Cornwall vs. Dick Cheney: here we have two political figures, so this match-up kind of makes sense. Cornwall was the younger brother of England’s King Henry III and was also King of the Romans (which is really “Germany”). Cheney used to be the Vice President of the United States and he shot a buddy in the face. Oh, and he looks like Penguin!

Richard Nixon vs. Richard Cromwell: more political figures! Nixon was once President of the US and “not a crook” (his words, not mine!). Cromwell was the son and heir of Oliver Cromwell. Richard tried to rule England as protector, but he was terrible and the monarchy was brought back instead.

Richard Rich vs. Richard Sherman: Rich was a douche who got Thomas More murdered. Sherman wrote a bunch of fabulous Disney songs.

Richard Dix vs. Richard, earl ofArundel: a Hollywood actor vs. an abrasive earl that was once bitch-slapped by Richard II. Good times.

Dick Whitman vs. Richard, duke ofYork: the birth name of Don Draper (Mad Men) vs. the father of Richard III.

Vote now – it’s what all the cool kids are doing!