A quote from the Historia Vitae et Regni Ricardi Secundi on Richard II. Taken from Chronicles of the Revolution 1397-1400 by Chris Given-Wilson, page 241.

"King Richard was of average height, fair-haired, with a pale complexion and a rounded feminine face which was sometimes flushed; he was abrupt and stammering in his speech, and, because he preferred to take counsel from the young, he was capricious in his behavior. He was prodigious with gifts, extravagantly ostentatious in his dress and pastimes, and unlucky as well as faint-hearted in foreign warfare. Towards his servants he often displayed great anger; he was also puffed up with pride, consumed by avarice, much given to luxury, and fond of burning the candle at both ends, sometimes staying up half the night, and at other times right through until morning, drinking and indulging himself in other unmentionable ways."

A little food for thought: when Richard II's tomb was opened in 1871, his skeleton was measured. The king clocked in at approximately six feet tall. Six feet! Either this chronicler doesn't know what he was talking about when he said Richard was of average height, or medieval people were not as short as people like to claim. The answer is probably a mix: the chronicler did NOT particularly like Richard, nor were medieval people all the size of leprechauns.

Things have been busy here, so I haven't been able to get a proper post together. Instead, enjoy some pictures from the Chinese Theater in Hollywood. 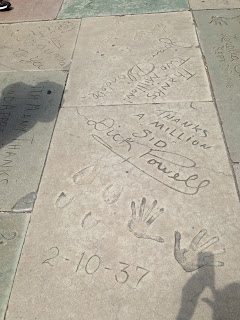 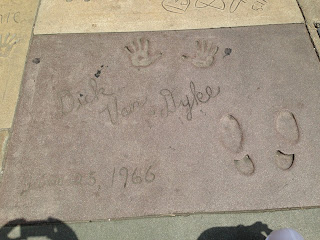 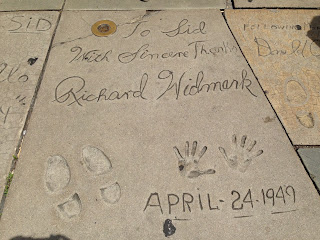 A friend mentioned this Hollywood great to me, and I first thought, "why does that name sound familiar?" It turns out that Richard Roundtree is Shaft ("shut your mouth!").
Richard Roundtree was born on 9 July 1942 in New Rochelle, New York. Before becoming an actor, Richard played football and was a model. He was a member of New Rochelle High School's nationally-ranked 1960 season football team. He attended Southern Illinois University Carbondale. Maybe he went there to play football? My sources don't say that he did, but why else would a kid from New York come to Illinois? Anyway, after college, Richard did some modeling and had a minor role as part of an interracial couple in 1970's What Do You Say to a Naked Lady?

And then Richard was selected to portray Detective John Shaft (FYI: the movie Shaft is based on a book of the same name. Check it out!). Shaft came out in 1971 and was a huge hit. According to the always reliable Wikipedia, the movie helped save MGM from bankruptcy and "spawned several years of 'blaxploitation' action films." In addition, the National Film Registry has selected Shaft for preservation as being culturally significant.

Richard played John Shaft again in two sequels (Shaft's Big Score and Shaft in Africa) and in a short-lived TV series, also called Shaft. Speaking of television, Richard has been on a lot of shows! Often it's just a small role, but he has cropped up in a lot of places.

One of his big roles was as the slave Sam Bennett in Roots. He also had large roles in the mini-series A.D. and series Outlaws, which ran for one season in 1986-87. He also played Dave Chapelle's father in the series Buddies, which lasted for 13 episodes in 1996. He was also a regular on Diary of a Single Mom, which lasted three seasons from 2009-2011. Smaller roles include, but are not limited to:

That's some range! The people watching Touched by an Angel are probably not the same people checking out Grey's Anatomy. It's good to know Richard is reaching them both.
As far as movies go, Richard has had some smaller parts in more recent films such as the comedy George of the Jungle and the thriller Se7en.

In 1993, Richard was diagnosed with breast cancer and had a double mastectomy and chemotherapy treatments. He made a full recovery because he is still alive today.

Richard Weedt Widmark is a Hollywood actor best known for his villainous and anti-hero roles, although he later moved into westerns and dramas. I had never heard of this particular Richard until a grad school friend mentioned him, and now I feel kind of bad. Richard Widmark has been in 75 movies! 75! That's a ton. I can't believe I didn't know about him.
Anyway, Richard's first movie was Kiss of Death (1947) in which he played a giggling creepster named Tommy Udo. Udo's most famous scene comes when he murders a wheelchair-bound woman by pushing her down a flight of stairs. That is some serious shit, especially for a movie in the 1940s.

This is Tommy Udo. He looks creepy.


Richard did a bang-up job in this role. He was nominated for an Oscar as Best Supporting Actor. He didn't win, but he did win the Golden Globe for "Most Promising Newcomer." In fact, Richard was the first person to win this award (the award was discontinued in 1983 after Ben Kingsley won).
Richard spent the 50s, 60s, and 70s acting in a bunch of stuff. He was in some westerns (The Alamo and How the West Was Won) and he played the murder victim in Murder on the Orient Express.
He was evidently pretty darn famous, as he played himself in a 1955 episode of I Love Lucy. In the episode, Lucy sneaked into Richard's house to obtain a souvenir, but was caught by the actor while trying to hide under a rug.

Looking through Richard's filmography, I realized that I have seen him in action in the 1989 made-for-TV movie Cold Sassy Tree. Richard played the main character's grandpa, Enoch Blakeslee. To be honest, I have mixed feelings about this. Cold Sassy Tree and I do not get along (for reasons I will not go into here), but I'm pleased that Richard portrayed one of the few characters I could actually tolerate. On a related - and even more shocking note - the main character (who is a teenage boy) was played by none other than Neil Patrick Harris! NPH! I can't even.

Richard seems like he was a cool guy. He was married to his first wife, Jean, for 55 years, until her death in 1997. In 1999, Richard remarried and was with his second wife until his own death in 2008.
Richard also has a miniscule airport named after him. Back in the day, he had a ranch near a small town in Missouri, and he gave a bunch of money for an airport to be built. If you build it, they will name it after you.

Finally, Richard was apparently no fan of guns, despite frequently toting them on the silver screen. According to the great Wikipedia, Richard once said:

"I know I've made kind of a half-assed career out of violence, but I abhor violence. I am an ardent supporter of gun control. It seems incredible to me that the United States are the only civilized nation that does not put some effective control on guns."

http://en.wikipedia.org/wiki/Richard_Widmark
Posted by White Hart at 07:08 No comments: