This is a quick entry because I'm traveling. Currently, I'm in Budapest, which has a Richard's Pub. Check it out here.
It's good to know that even Hungary has Richards.
Posted by White Hart at 23:53 No comments:

Dicks on a Mug

Here's a fabulous mug with fabulous shots of Richard II and Richard III. 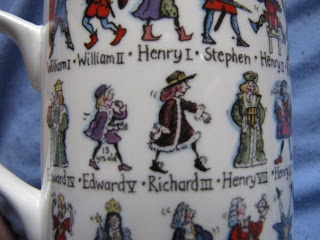 Quite the dandy, isn't he? 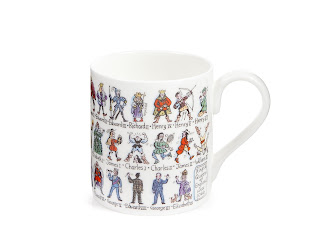 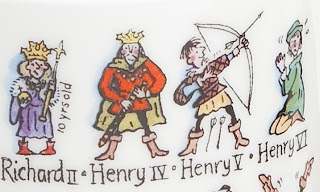 And Richard II, still looking like a little kid.


In July 2009, I purchased a mug at the National Portrait Gallery gift shop, which featured miniature cartoon drawings of the monarchs of England since 1066. Each ruler, from William the Conqueror to Elizabeth II, was depicted in varying sensible (John looking shocked when reading Magna Carta) to ridiculous (Henry II playing leapfrog with a table) fashion. Three of the kings appeared as children, conveniently labeled with their ages when they ascended the throne: Richard II (age ten), Edward V (age thirteen), and Edward VI (age nine). Depicting Edward V and Edward VI as children makes sense, as both died before reaching adulthood (around ages thirteen and sixteen, respectively). Richard II, on the other hand, ruled as king for twenty-two years, going from a ten-year-old boy to a thirty-two-year-old man. Richard II’s situation more closely parallels Henry III (king at age nine) and Henry VI (king at age nine months) than the two later Edwards. Richard was a child when he became king, but he was a man when he was deposed. Unlike Richard, though, Henry III and Henry VI are represented on the mug as men, leaving the Black Prince’s son as the only perpetual child who actually grew up. The mug’s seeming mistake is a modern manifestation of Richard II’s image problem. Despite becoming a chronological adult, Richard II, in the eyes of many, never reached full maturity.

At one point, I tried that as an intro to a discussion of Richard II's maturity problem. It was not academic enough to remain in the dissertation, but I find it very telling. Why is it that Richard II, out of all the kings of England, can't grow up, even hundreds of years later? Even Henry VI gets to grow up and he became king at age 9 months.

Christopher Fletcher has written a really great book about Richard's maturity problem (citation below), but I argue it also had something to do with Richard's childlessness. Maybe someday I'll be published and you can read about it.

Richard Overton is the oldest living veteran in the United States. He just turned 107 on May 11, 2013.

Richard served in the US Army during World War II. From 1942-1945 he was in the South Pacific. After being discharged in October 1945, Richard returned to Texas where he initially worked in a furniture story. Later he worked for the Texas Treasury Department and didn't retire until he was in his 80s!

Richard was married twice, but he never had any children. I find it fascinating that this appeared in the news. It's not anybody's business whether Richard has children, but I appreciated the info as I am always on the lookout for childlessness. In fact, Richard Overton is like Richard II: married twice with no kids! Granted, Richard Overton was never king, but he has lived over three times as long as Richard II, so it's probably a wash.

Richard likes to do yard work and does not watch any television. He smokes as many as twelve cigars a day and often drinks some whiskey with his coffee or with soda water in the evenings. Richard is quoted as saying, "Whiskey’s a good medicine. It keeps your muscles tender."

In other news, when I googled "Richard Overton" I discovered that there was an English pamphleteer during the English Civil War and Protectorate with the same name.

Overton was a big fan of representative government and a big enemy of tyranny (which in his mind seemed to be monarchy). Anyway, he wrote a lot of pamphlets and was sent to prison a fair amount because that's how life was in the 1640s.


Read more on the veteran:

This will be a short entry because today's subject is a really bad person. But a blog such as this cannot fail to comment on today's news:
Richard Ramirez, the Night Stalker, died today.

Ramirez was a serial killer who terrorized California (namely Los Angeles and, briefly, San Francisco) in 1984-1985. He was convicted in 1989 of 13 counts of murder, 5 counts of attempted murder, 11 counts of sexual assault (one of which was the rape of a little girl), and 14 counts of burglary. He was awaiting execution on death row when he died of liver failure around 9 AM today (June 7).

The best part of the Night Stalker story is his capture. To elude police capture, the Night Stalker (whose face had been in the newspaper) ran towards East LA looking for a car to boost. He found one sitting in a driveway with the keys inside. When he started the car, he found out why the keys were inside: the owner was underneath the car making repairs. The owner jumped onto his own car like an action-film hero and wouldn’t get off. Since his vision was obstructed, Night Stalker abandoned that car and tried to car-jack a woman who was getting ready to drive to work. When she screamed, her husband came running and started beating on Night Stalker. His shouts alerted the neighbor man, who came running with his strapping teenage sons. Night Stalker exited the car and took off running down the street. The neighbors recognized him from the newspaper picture, so they took off after him, eventually catching him and subduing him (no doubt through a beat down). And so, the Night Stalker was brought low by teamwork. Go East LA!