Richard III and His Bones


Yesterday, 4 February 2013, was a special day: it was confirmed that archaeologists had found the bones of England’s King Richard III. Huzzah! In my circle of friends, family, and acquaintances, I am the biggest Richard III fan anyone knows, so I had people e-mailing the link to me all day. It was awesome to know so many people think of me when they think of Richard III. I have truly touched greatness ; )

Anyway, I’m going to provide a little play-by-play concerning the skeleton. I’m not a medical doctor, but I love Richard III, so here goes.

All pictures are from CNN via the University of Leicester. 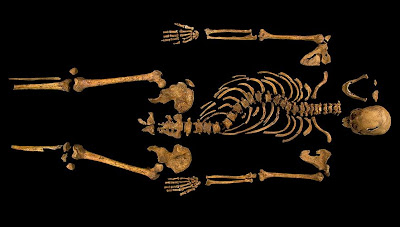 This lovely shot of the full skeleton reveals that Richard III had some serious scoliosis. This gives some credence to the so-called Tudor Myth that Richard was a hunchback. He wasn’t a hunchback of the Quasimodo variety, but he would have had one shoulder higher than the other. He also probably would have been in substantial pain (not necessarily 24-7, but with a spine that curved he can’t have been comfortable), so maybe he didn’t have the friendliest visage around town. However, Richard’s skeleton offers no proof that he had a tail or spent two years gestating in his mother’s uterus, so we’re going to have to concede that the Tudor Myth contains both fact and fiction. Really, all the best myths do.

Scoliosis also affected Richard’s height. Presumably he would have been a bit stooped and the disease might have stunted his growth a little. Strangely enough, none of the news articles I read gave a height for Richard (surely they measured the bones?), but it’s safe to say he was shorter than his elder brother, Edward IV, who supposedly clocked in at over six feet tall.

The death blow. Richard’s skull has injuries to the right cheek and a big old hole at the top. Sounds like Richard died from blunt force trauma to the head – or getting smacked upside said head with a halberd (a nasty medieval weapon that is basically an axe on a big stick). No word on horses, but I don’t think one would have made a difference (sorry Shakespeare). 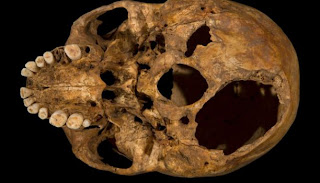 The bones do show evidence of mistreatment after death, which is consistent with historical accounts. There are cuts on various bones (such as the ribs) that suggest the victorious Tudor party had some fun with their enemy’s corpse. In addition, the head archaeologist (Richard Buckley) speculated that Richard’s hands were tied together (based on their placement when the body was discovered). This further suggests Richard’s body was subjected to some indignities. 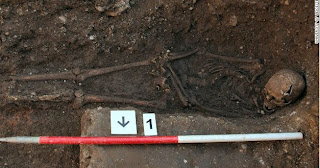 Now where is the body going to rest? I’ve heard some people call for Westminster Abbey, but burial in Leicester Cathedral is almost guaranteed. Leicester Cathedral already has a memorial to Richard; putting his body underneath the rock wouldn’t be terribly difficult. I think a more interesting question is whether there’s going to be a funeral – and, if so, what kind. Richard, like the majority of medieval Europeans, was Catholic, but England is now a Protestant nation. Maybe a joint Anglo-Catholic funeral?

The other thing I find interesting is that the Richard III Society plans to use the discovery of the body to launch yet another case to rehabilitate Richard’s reputation. Okay. I understand using publicity for Richard to achieve publicity for your cause, but we found his bones, people, not a pile of letters he addressed to the “Princes in the Tower” in August 1485. We also now know Richard was a hunchback (so to speak): this actually gives legs to the Tudor Myth rather than contradicting it. I imagine Richard’s bones will renew cries to re-examine the princes’ bones, which are in Westminster Abbey and were last checked out in the 1930s. Whether those bones are the princes or not, though, the debate will never be over. The bones don’t have “we died in 1483” written on them, so even proving who they are doesn’t prove when they died. And if, by some chance, they aren’t the bones of the princes…. Well, maybe those guys are under a parking lot, too.

Finally, it is worth noting that Richard probably overcame a fair amount of hardship. His severe scoliosis would have made wearing armor, riding a horse, and waging war painful, so props to him. Granted, Richard didn’t have a lot of choice since he was a member of the military, noble class, but it couldn’t have been easy. Achieving the throne is rather impressive, too. Medieval thought linked an ugly appearance with an ugly soul (somewhat similar to the idea that leprosy – a disfiguring disease – was the result of sin on the part of the sufferer), so Richard sort of had the deck stacked against him. It took great force of will to get where he did. So yeah, Richard III probably was a cold, realpolitik-esque, heartless bastard. Most winners (even if their victory is short) were.
Posted by White Hart at 00:53