The end is near, everyone! Only two more rounds to go (this one and the one next week). I didn’t fully realize that this contest would take so long; apparently, Dick Madness is a take-off of March-April Madness. Anyway, continued thanks to everyone who has voted. Your participation means a lot.
Only one of last week's four contests was in any way close: Richard Burbage vs. Charles Dickens. I have my reasons for breaking the tie the way I did and said reasons will be revealed below.
Over the weekend, I was watching some ESPN highlights with my Dad (well, he was watching them and my eyes were drawn to the bright lights of the television screen), and I learned that basketball has a Final Four (lame) while college hockey has the Frozen Four (cool). So maybe I should call this the … Flaccid Four? Hmm, probably too graphic. Maybe we’ll go with Freakin’ Fabulous Final Four. What I lack in creativity, I more than compensate for with alliteration.
I therefore present our Freakin’ Fabulous Final Four brackets! 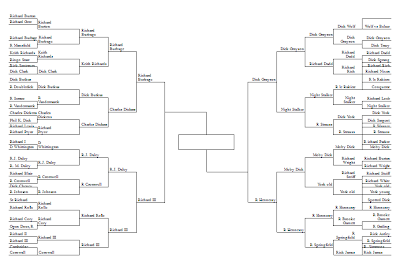 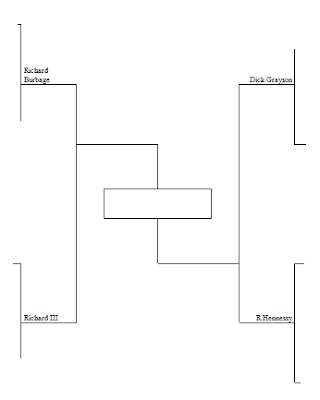 Richard Burbage vs. Richard III
It’s a Richard III battle: the man himself versus the first actor to portray him in Shakespeare’s Richard III. I have a feeling we all know how this is going to shake out: usually, the original is the best.
Dick Grayson vs. Richard Hennessy
Comic book hero versus eponymous cognac mogul. Dick Grayson doesn’t drink much (comics have varied between him flat-out saying he doesn’t drink to showing him having an occasional beer), while Hennessy was an eighteenth-century Irish mercenary – meaning he must have imbibed a shit-ton of alcohol over his lifetime. Both are fighters: one in the war on crime, the other in actual wars.
You know what to do! Please e-mail your votes to me at dicksihavestudied@gmail.com or post in the comments.
Posted by White Hart at 16:24