Here we are, already on Round Three. Thanks again to everyone who has voted. I really appreciate your input!
We only had one shut-out this time, with Richard III putting the smack down on his distantly-related ancestor, Richard, earl of Cornwall and King of the Romans. Poor Cornwall; he had a good run. I had to break two ties this time: Richard Hennessy vs. Richard Brooke Garnett and Rick Springfield vs. Rick James. I went with Hennessy as a sop to my brother; also, Garnett was a Confederate general and I’m a Union supporter. I allowed Rick Springfield to defeat Rick James because Springfield is actually named Richard. “I’m Rick James, bitch!” can only take a man so far.
It’s becoming a bit difficult to categorize these contests, so my apologies if the categories seem lame and/or overdrawn.
I have included two pictures of the bracket; one is a close-up of this round, which you can hopefully read. 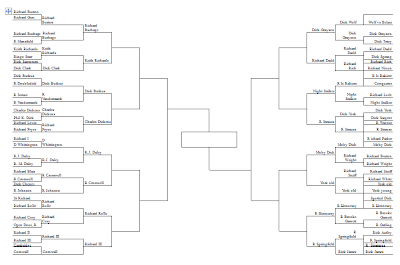 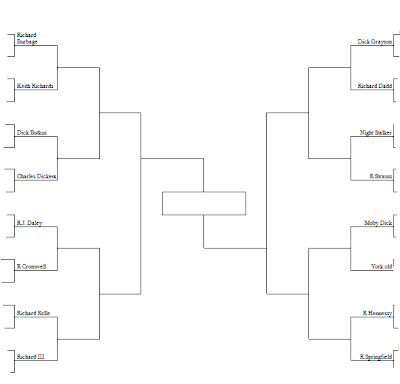 Dick Madness Round Three
Left side:
Entertainers:
Richard Burbage vs. Keith Richards
Burbage was a Shakespearean actor in the truest sense of the word: he acted in Shakespeare’s plays alongside William Shakespeare. Keith Richards is one of the most important members of The Rolling Stones and played a pirate in a movie.
Yet another Last-Name Battle:
Dick Butkus vs. Charles Dickens
Butkus is an unfortunately-named football player. Dickens, obviously, is a famous Victorian writer. Dickens has been riding high in this tournament, even though he barely qualifies for inclusion. Something might have to be done about that.
Politicians:
Richard J. Daley vs. Richard Cromwell
I was rather disappointed that Dick Whittington was vanquished by a modern mayor, but I shall endeavor to soldier on. Daley was a long-serving mayor of Chicago, who helped the city avoid the fate of Detroit (becoming the butt of numerous jokes). Daley, however, failed to do much to integrate Chicago housing, which was not so great of him. Cromwell had a long life, but a short political career as Protector after the death of his father Oliver Cromwell. Richard Cromwell tried hard but he wasn’t really cut out for politics and spent the rest of his post-Protector days either in exile or living off the allowance his children provided for him.
Medieval:
Richard Rolle vs. Richard III
Rolle was a recluse and mystic, writing about the fire of God’s love. Most likely, Rolle died of the plague, being carried off to meet his Maker in the first big outbreak (around 1349). Richard III was a duke and a king, who died (possibly for lack of a horse) on Bosworth Field. Oh yeah, and Richard III probably murdered his nephews, from whom he had usurped the throne (can’t forget that one!).
Right side:
Art (this is an overdrawn category!):
Dick Grayson vs. Richard Dadd
Dick Grayson (member of the Batman Family) is a fictional comic book character, who has been drawn by various and sundry people. Although Dick’s personal aptitude for art has never been explored, he’s provided inspiration and paychecks for many an artist. Richard Dadd was an actual artist, known for his extremely-intricate fairy/fantasy paintings. Dadd also suffered from mental illness and spent his later life in an asylum (after he had killed his father). Thankfully, Dadd was allowed to paint while in the hospital; some of his most famous work was done after he was institutionalized.
Foreign-Sounding Last Names:
Richard Ramirez the Night Stalker vs. Richard Strauss
Another example of me grasping at straws. By foreign-sounding I mean “not English” (language, not country), as the Night Stalker was from Texas. Richard Ramirez murdered numerous people in California in 1985 and he’s still on death row in California today. In either the late 1990s or early 2000s (I forget which), he got married while in prison to a woman who had been writing him letters. As far as I know, they’re still married, even though they must rarely see each other and never have sex (apparently California forbids conjugal visits for those on death row). Richard Strauss was actually foreign, being of German-Austrian extraction and living in Europe throughout his life. He was a famous late-Romantic composer.
Random:
Moby Dick vs. Richard, duke of York (d. 1460)
I totally threw in the towel on categorizing this match-up. Moby Dick, the great white whale of literary fame, is facing off against Richard, duke of York, father of Richard III and Edward IV. The duke also helped bring about the Wars of the Roses, so he might be responsible for more deaths than the giant sperm whale.
Pop Culture:
Richard Hennessy vs. Rick Springfield
Hennessy, while originally a man, is now also a beverage. His cognac is favored by the gangster-rap crowd and has received a shout-out or two in hip-hop lyrics. Rick Springfield is a lame pop singer known for “Jessie’s Girl.” This week I realized that “Jessie’s Girl” is spelled ie rather than just e; isn’t that the girl spelling of Jessie? Should a man spell it Jesse? I realize I shouldn’t be so gendered, but maybe Rick can’t have Jessie’s girl because said girl isn’t interested in men.
Same drill with the ballot. Please e-mail it to me at dicksihavestudied@gmail.com or post in the comments. You can either bold or underline your votes; another option is to delete the person you are NOT voting for. Vote for all or vote for a few!
Dick Madness Official Ballot for Round Three
Left side:
Entertainers: Richard Burbage vs. Keith Richards
Last Name: Dick Butkus vs. Charles Dickens
Politicians: Richard J. Daley vs. Richard Cromwell
Medieval: Richard Rolle vs. Richard III
Right side:
“Art:” Dick Grayson vs. Richard Dadd
“Foreign Names:” Richard Ramirez the Night Stalker vs. Richard Strauss
Random: Moby Dick vs. Richard, duke of York (d. 1460)
Pop Culture: Richard Hennessy vs. Rick Springfield
Posted by White Hart at 17:54