Round Four (also known as the Quarter Finals) has arrived! Thanks again to everyone who has voted.
It’s becoming a bit difficult to develop categories, so I’m throwing in the towel. Vote for whichever Dick you prefer!
Once again, I have included two pictures of the bracket; one is a close-up of this round, which you can hopefully read. 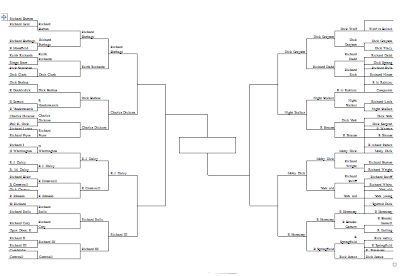 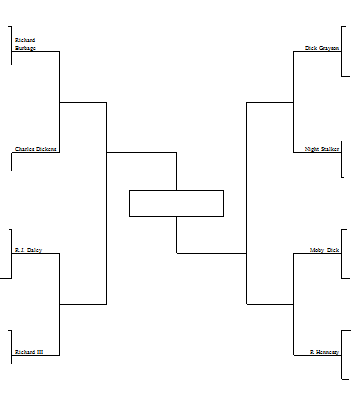 Dick Madness Round Four
Left Side:
Richard Burbage vs. Charles Dickens
A true Shakespearean player squares off against a towering figure of Victorian novels. Both were wordy – Burbage was known for playing leading roles that involved a bunch of lines while Dickens got paid by the word (and it shows).
Richard J. Daley vs. Richard III
Yet another political battle. Daley was the long-serving mayor of Chicago, while Richard III was a short-serving king of England. Both have skeletons in their closet: Daley was a bit racist and Richard III murdered his nephews.
Right Side:
Dick Grayson vs. Richard Ramirez the Night Stalker
Here we have a fictional crime fighter vs. a real-life serial killer. I know who I would rather meet in a dark alley. This is especially true because the Night Stalker has gross rotten teeth (courtesy of eating bad food and never brushing) and Dick Grayson seems to have pretty good teeth (fictional people often do. It’s so easy to keep your fake teeth looking good). I hate bad teeth; if I was going to be murdered, I’d at least want it to be by someone debonair like Hannibal Lector.
Moby Dick vs. Richard Hennessy
The great white sperm whale is going strong, much to Captain Ahab’s regret. Moby now has to withstand attacks from Irish mercenary and cognac connoisseur Richard Hennessy.
Same bat-drill (same bat-e-mail) with the ballot. Please e-mail it to me at dicksihavestudied@gmail.com or post in the comments. You can either bold or underline your votes; another option is to delete the person you are NOT voting for. Vote for all or vote for a few!
Dick Madness Official Ballot for Round Four
Left Side:
Richard Burbage vs. Charles Dickens
Richard J. Daley vs. Richard III
Right Side:
Dick Grayson vs. Richard Ramirez the Night Stalker
Moby Dick vs. Richard Hennessy
Posted by White Hart at 15:21