To keep you in suspense just a tiny bit longer (Don’t prematurely scroll down! Don’t prematurely scroll down!), please “enjoy” my first (and utterly horrible) foray into Photoshop.
Seriously, if you don’t use Photoshop to create pictures of Dicks making out then what is even the point of owning Photoshop?
I have decided, however, not to blame this debacle on my own ridiculously bad photo shopping skills, but on Richard III. There is a shocking dearth of images of him making out with people. I can’t say the same for Dick Grayson; if the internet is to be believed, that guy will make out with anyone. Naturally, I picked one featuring him (as Robin on Batman: The Animated Series) making out with Bruce Wayne/Batman. Another thing the internet loves is Bat-homosexuality, with the murkiness of potential pedophilia thrown in to make it extra-titillating.
Anyway, Richard III is a terrible lover. It’s as though these two don’t even know each other.
Back to business, though. The winner is …. 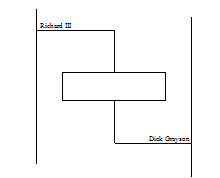