*Happy International Women’s Day, everyone! A blog dedicated to people named Richard is not the most likely place to go to celebrate this epic day, but there you have it.
First, many thanks to those who voted. I sincerely appreciate your input. To those of you reading but not voting – please vote! I won’t bite; in fact, I will send you a thank-you e-mail (enticing, I know).
Second, a few observations before I reveal the Round Two bracket. We had several almost shut-outs. Richard Burton (the writer, adventurer, etc.) was thoroughly trounced by Richard Wright. I guess that’s what Burton gets for being racist! Same with Wagner; I believe his anti-Semitism probably made most people vote for Strauss. We had two actual shut-outs: Richard III completely annihilated Richard II. I chalk this up largely to my own incessant prattling about Richard III (surprise: everyone who voted personally knows me and has listened to me yap about Richard III). I had no idea I was so influential. Dick York also shut-out Dick Sargent. Most people must not have noticed the change on Bewitched!
For me, one shocker was that Richard Lewis almost beat Richard Pryor (are there a lot of Curb Your Enthusiasm fans reading this blog?). At the last minute, though, Pryor came from behind and snagged a victory.
Furthermore, we have many compassionate folks reading. Almost everyone voted for Richard le Rakiere, the unfortunate who drowned to death in feces soup. I’m guessing people did this because they felt bad for the poor sap; otherwise, you all must be plotting to kill your enemies. People also expressed their deep-seated dislike of Rick Santorum. I feel you there, people, but the man does rock the sweater vest as only the most special of douche-bags can. All right, enough of this clap-trap. I will not give a run-down of every category or we’d be here forever. Although….
Third, a special spotlight on one winner: Richard Burbage. A few people voted for Richard Mansfield, which is fine, but I kind of feel like everyone would have voted for Burbage had I posted this story. [Many thanks to my erudite Canadian friend for sending me this divine quote!]
From The Diary of John Manningham of the Middle Temple 1602-1603 [I have modernized the spelling and punctuation.]
“Upon a time when Burbage played Richard III, there was a citizen grew so far in liking with him, that before she went from the play she appointed him to come that night unto her by the name of Richard III. Shakespeare, overhearing their conclusion, went before, was entertained, and at his game before Burbage came. The message being brought that Richard III was at the door, Shakespeare caused return to be made that William the Conqueror was before Richard III. Shakespeare’s name [was] William.” [told by Mr. Touse; see page 75]
Shakespeare and his cronies were players in more than one sense!
Without further ado, the new bracket is below. Explanations follow, along with the ballot. 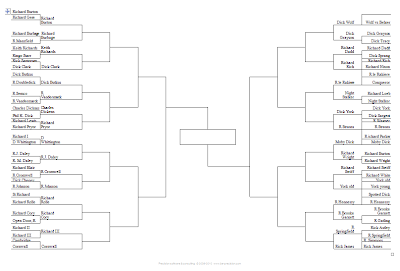